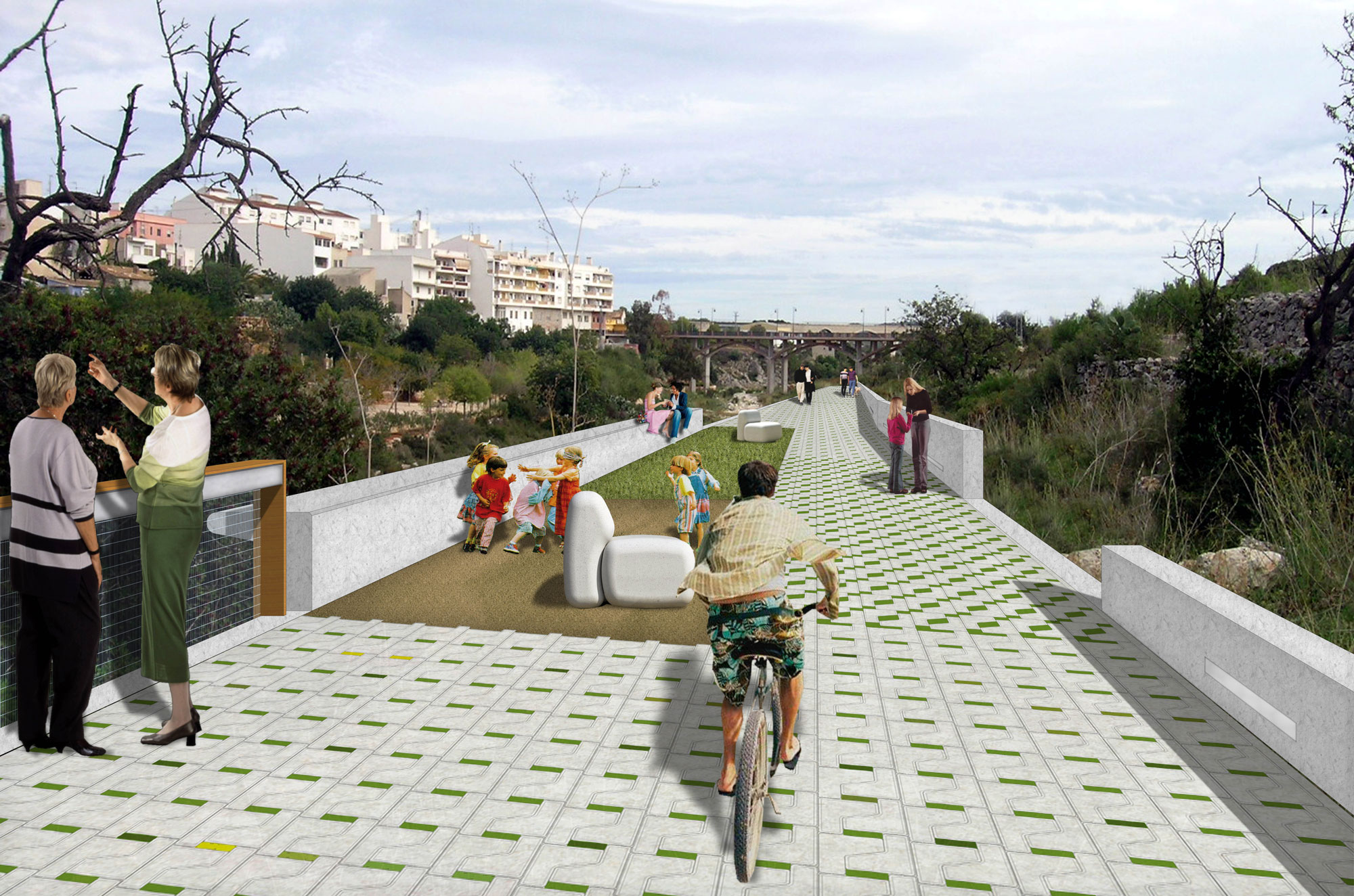 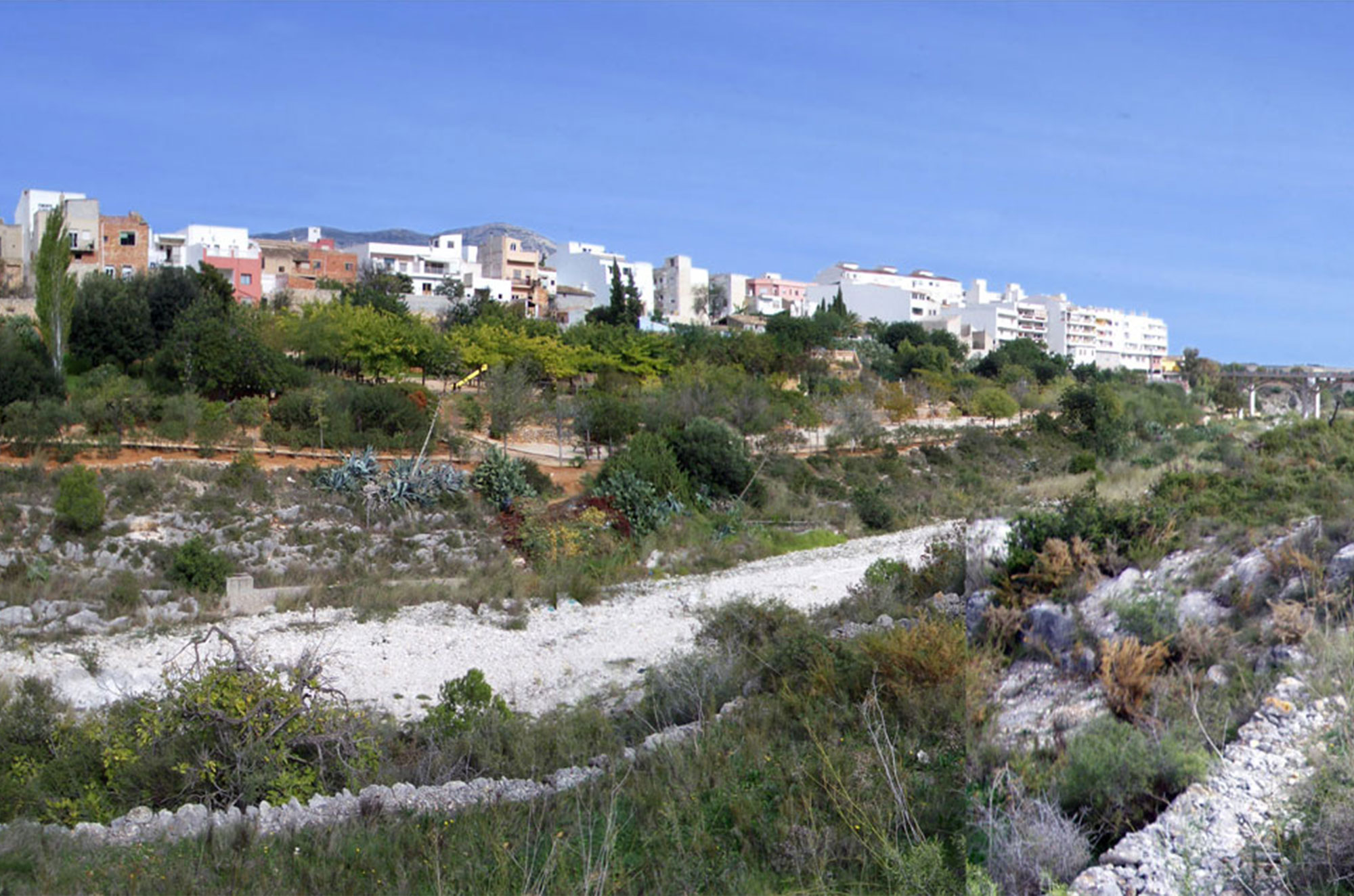 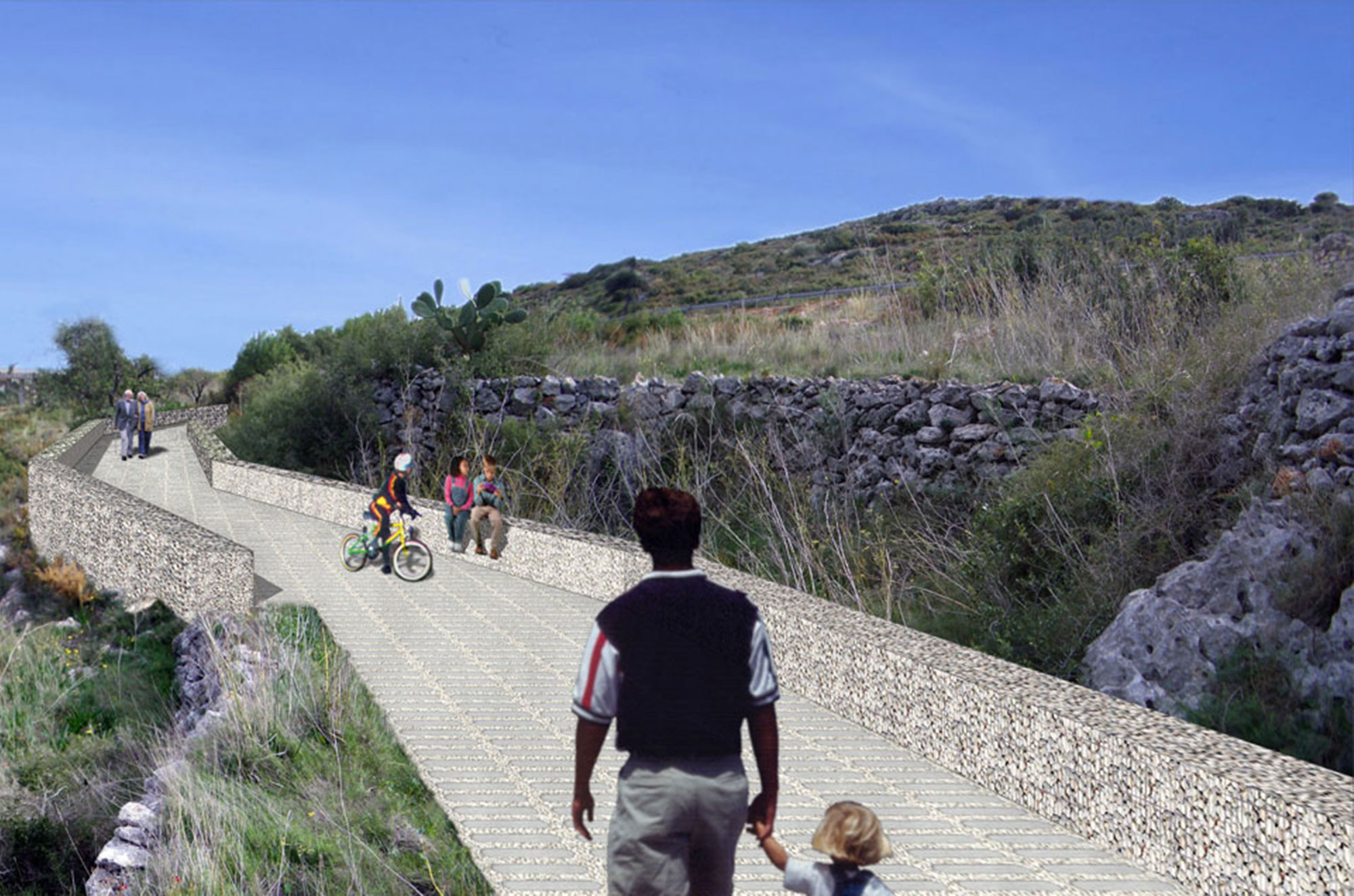 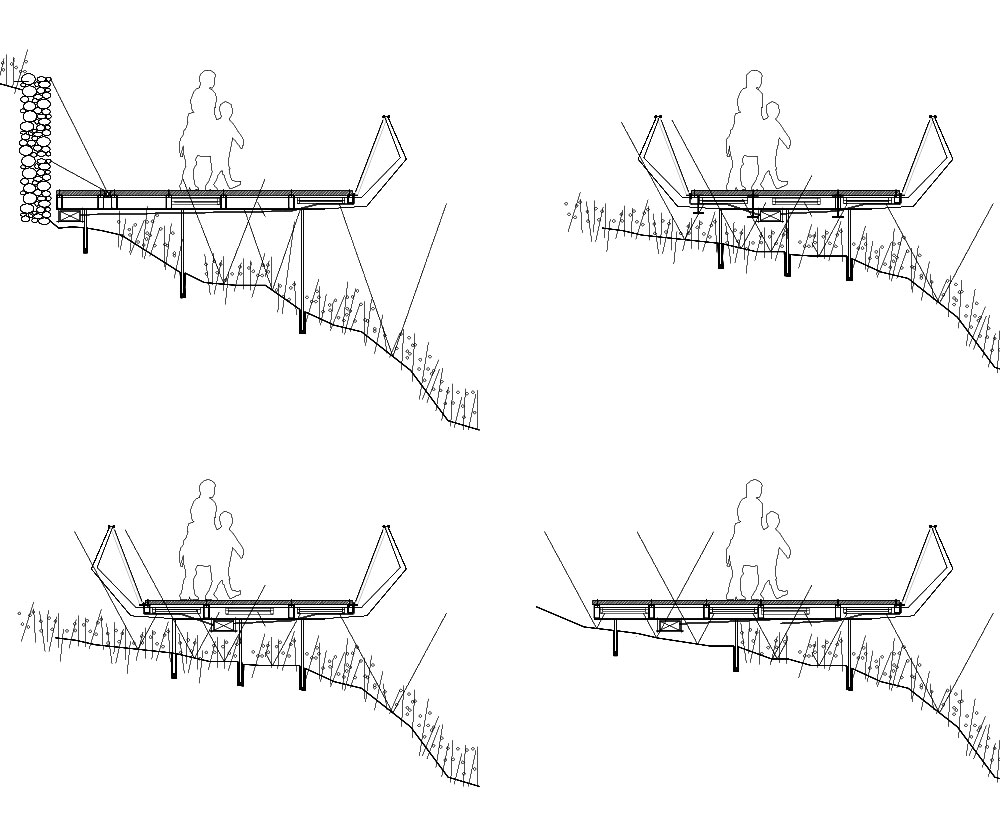 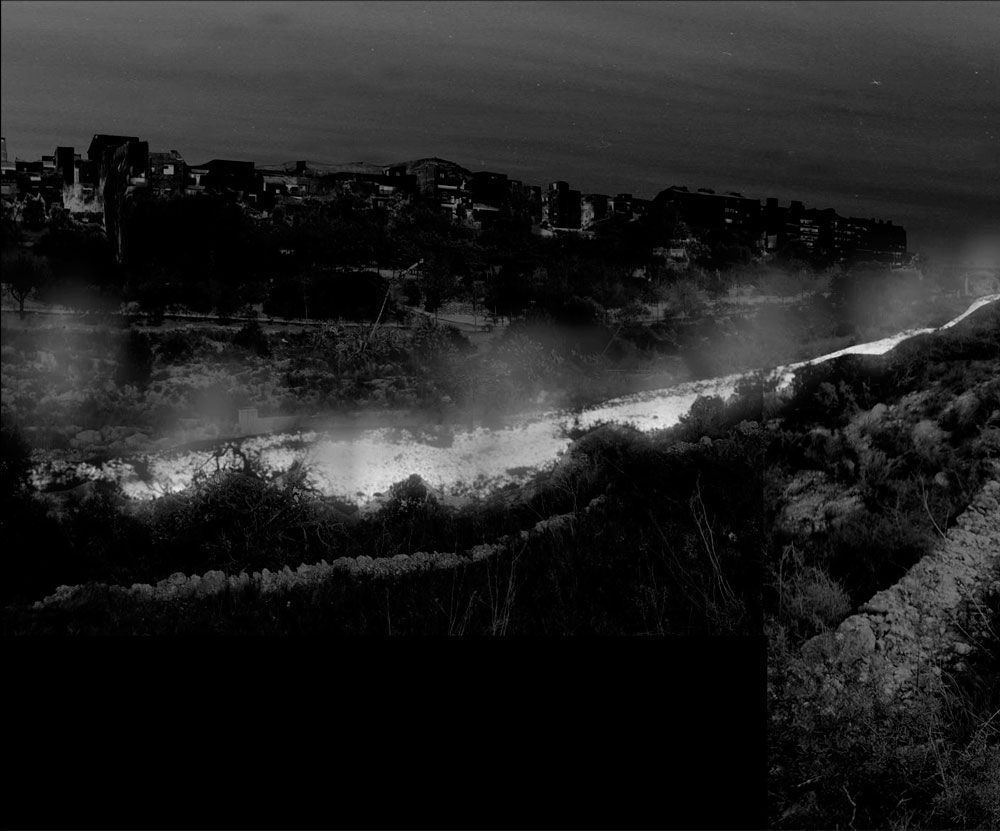 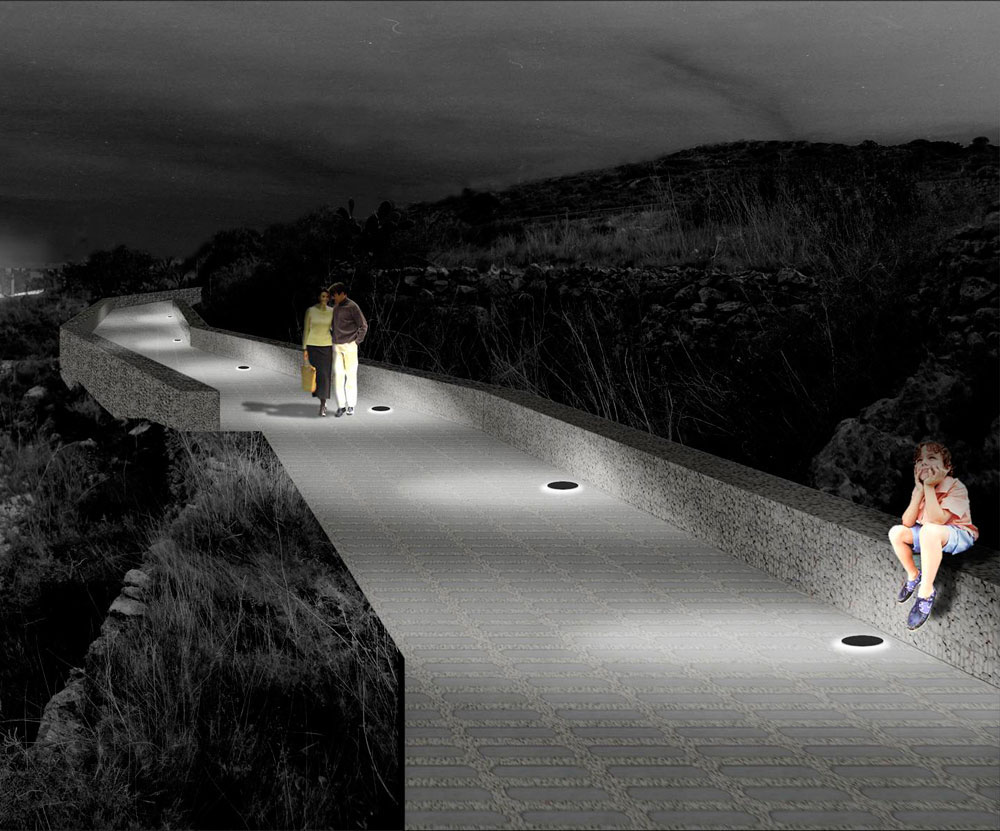 Our intention was to create a project that worked fully, both during daytime and night-time, creating an overall effect and managing to reinsertthe riverbank’s spirit into the city, operating both day and night so that citizens began to consider the river as something more, with an urban outlook, flowing 365 days a year.

On the left bank, the walkway rests on one point over the territory, forming the limit between the rear part of the urban section and the watercourse. It will be a lightweight and porous walkway made from steel that allows us to see and maintain the ground below intact. This is built using paddles placed approximately 3 metres apart that allow for the formation of the different pavements, the rest areas, the shade, lighting bases, as well as the construction of a new wall that forms the limit with the existing constructions.

The escarpment raises above the river and village. At this point, views can be enjoyed, points that relate the territory to the surroundings, it is not necessary to insert a new programme that complements this, the actual programme will be the stroll and resting areas. A place in which to explain, to document, the route for the interest of passers-by, offering an explanation of the unwritten history, of the region itself, its crop system.

On the right bank, the existing landscape stretches out along the length of the hillside. The former masonry walks extend to allow for the use of the slope with a logic different to the original agrarian intention. We understand the watercourse as a necessary urban artefact for the latter to take on a presence in the town. The almond trees that already lined the banks, now longer perform an agrarian function and become denser and more expanded to form a landscaped forest.

In the shallowest part of the slope, there is nothing of interest on view, it is an area ripe for occupation. When devising this walkway, new imported ideas will be added, brought in to occupy the slope off-route. An equipped public space, that in the future may house new cultural functions that can operate to attract new users to the space. A technical hillside that can be reached even from other parts of the town, or indeed from other towns, thanks to the addition of a new parking facility.